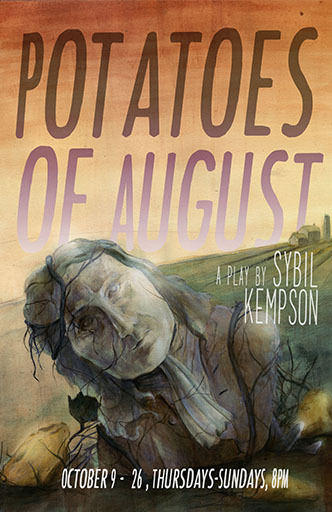 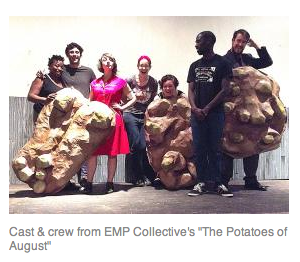 On NPR: "Baltimore’s EMP Collective is getting ready to stage an experimental play by Sybil Kempson, and to call it ‘experimental’ is an understatement. When The Signal’s Aaron Henkin dropped in at a rehearsal, all he knew about the play is that it features a trio of sentient potatoes. After his visit, he understood even less. Here’s Aaron’s attempt at a preview of The Potatoes of August." http://wypr.org/post/glow-o-s-taxidermy-artist-robert-marbury-painted-screens-and-potatoes-august
Posted by Lisa Krause at 2:08 PM 1 comment:

Puppet Design for POTATOES OF AUGUST at EMP Collective Oct '14.

After the closing of "We Are All Strangers Here" I was approached by Carly Bales, Artistic Director of EMP Collective, to be the Puppet Designer for their upcoming production: POTATOES OF AUGUST.

EMP Collective has since won Best Of Baltimore Award for Best Multiuse Space for Arts and Entertainment.  This will be their first show since receiving the award. 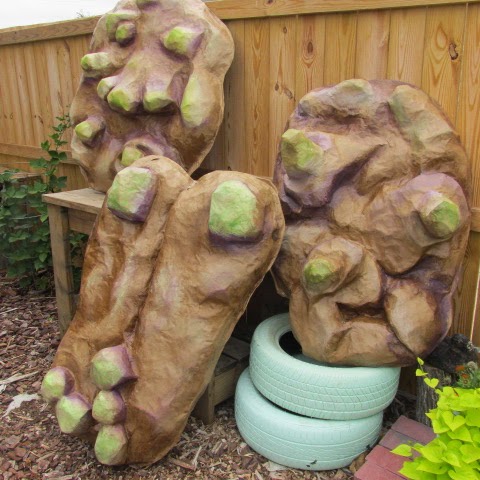 Thanks to everyone who volunteered to help out! 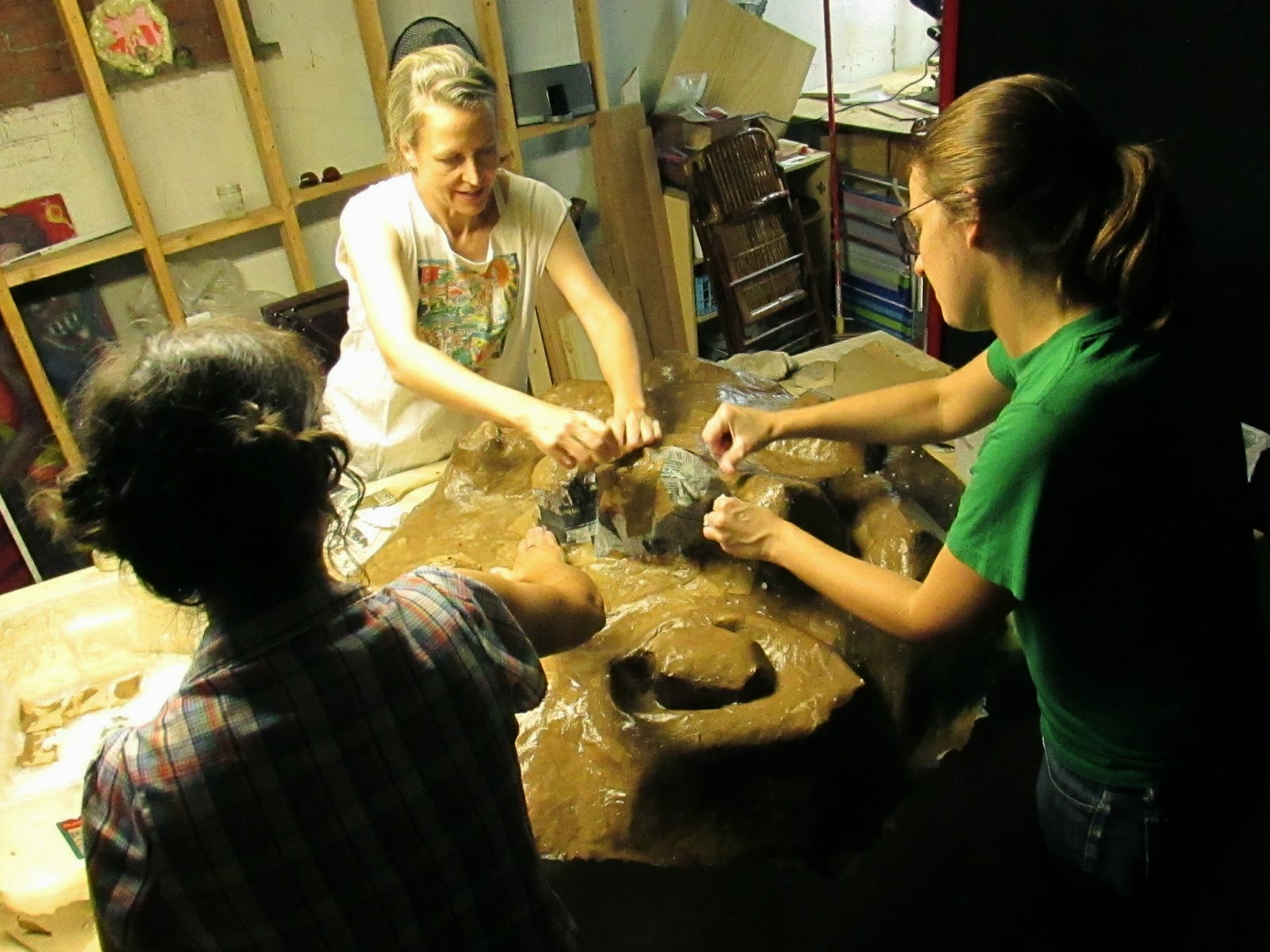 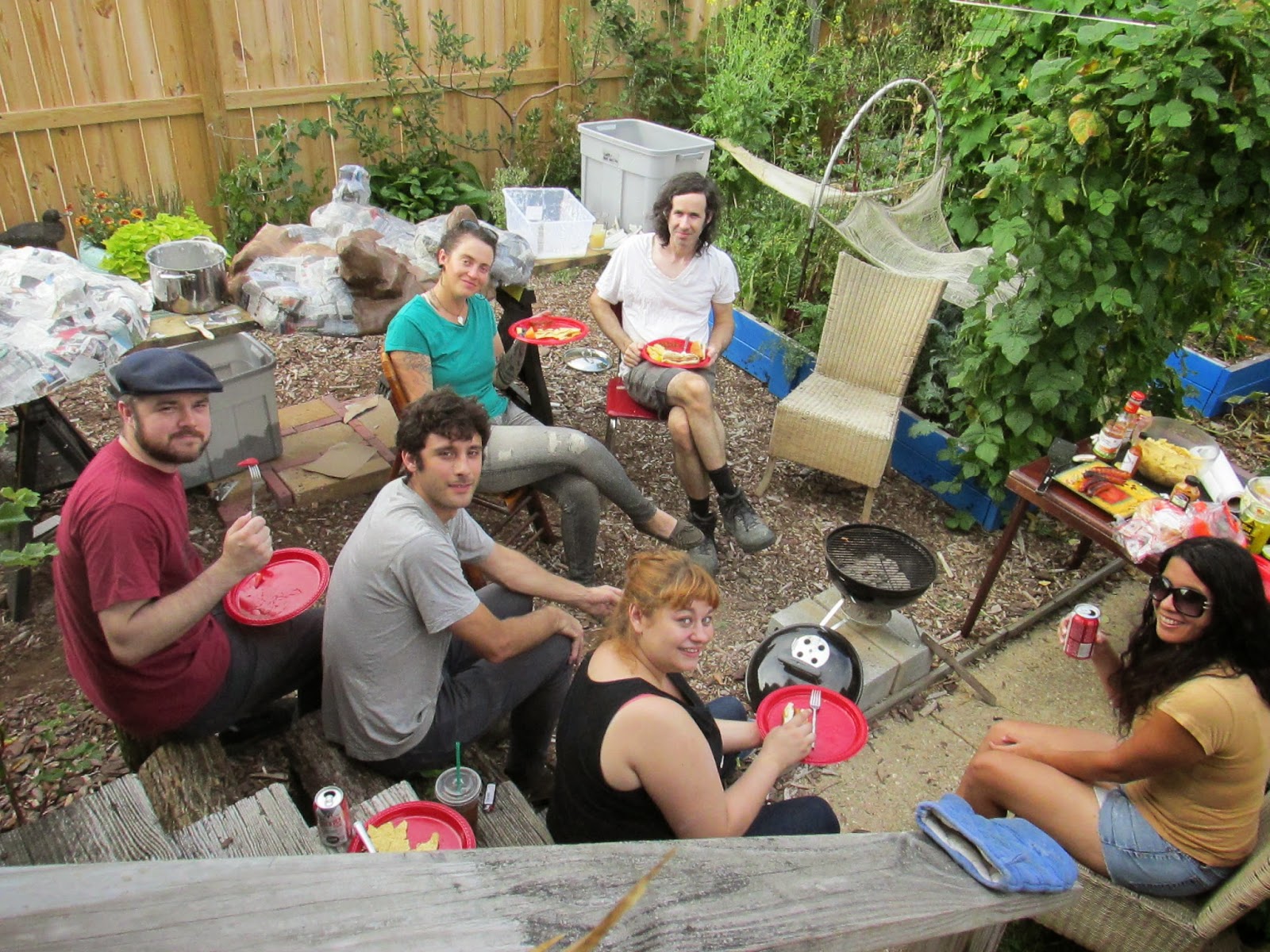 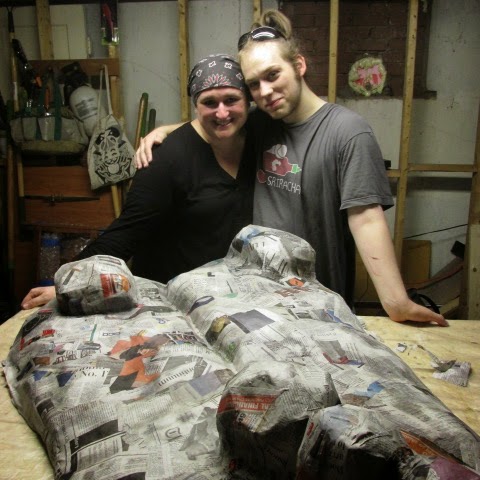 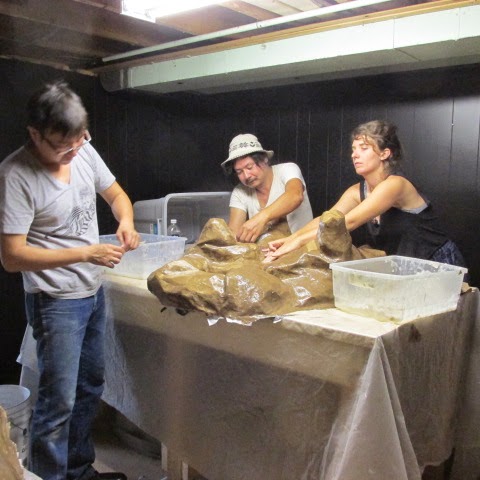 Posted by Lisa Krause at 2:40 PM No comments:

Inner worlds collide into extraterrestrial landscapes as artists create new terrains to be interpreted, reinterpreted, and to get lost in. 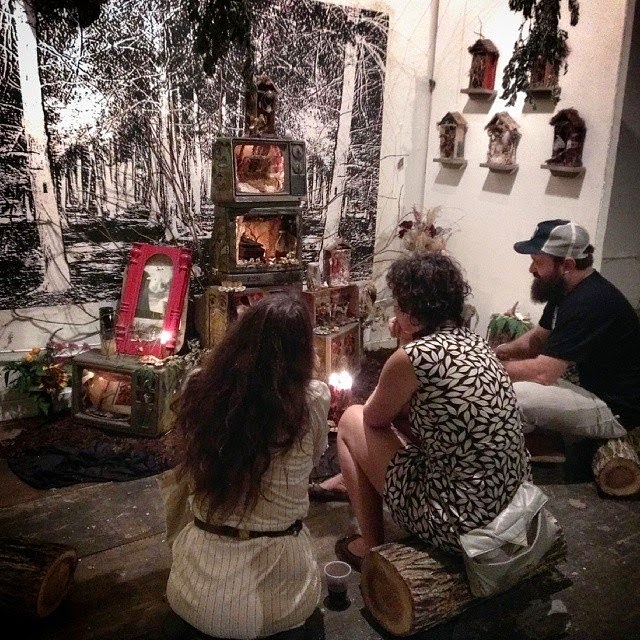 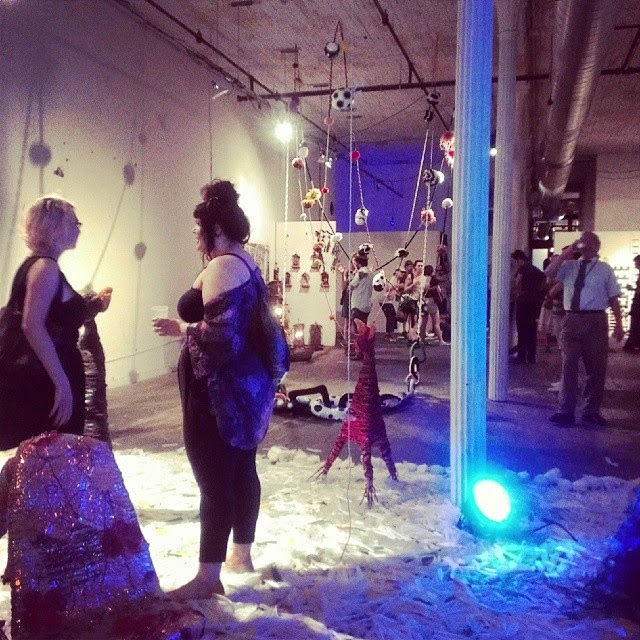 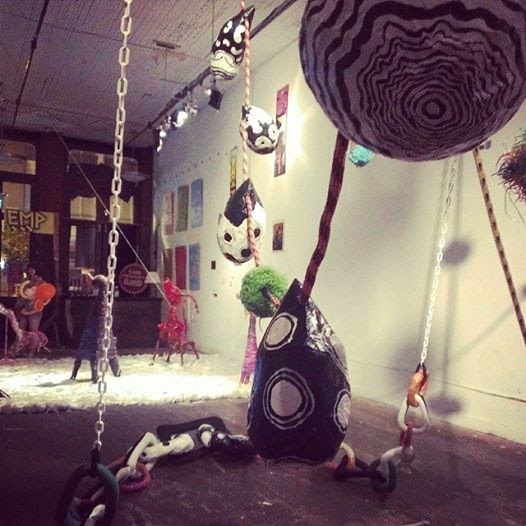 Posted by Lisa Krause at 6:09 AM No comments:


Ishi’s Brain is a show by Lisa Krause and Eamon Espey that incorporates shadow puppets, a marionette, masks and a liberal use of painted cardboard. It is based on a chapter in Eamon Espey’s new graphic novel, Songs of the Abyss published by Secret Acres. The initial inspiration comes from the true story, but is by no means a historical re-enactment.  Krause and Espey’s performance focuses on a lone spirit in his final days and an alien shaman who helps guide the dead into the next world. Original soundtrack by Stephen Santillian of Baltimore bands Ghost Life and Thank You.

Eamon Espey is a cartoonist based in Baltimore whose books include Wormdye (2008) and Songs of the Abyss (2012). Both were published by Secret Acres.  His work has appeared in art shows in such places as Los Angeles, Istanbul, and New York and in print in Sweden’s Galago Magazine and Washington DC’s Bash Magazine.

Songs of the Abyss further examines and diagrams all things spiritual and grotesque. Ancient Egyptian gods birth Biblical giants, Santa Claus is an agent of the Devil and a scientist performs sadistic experiments in search of enlightenment. All is rendered in black ink with scalpel like precision. The cover remains true to the hand crafted aesthetic in that it is a stained glass design handmade by the author specifically for the book.

Link to Songs of the Abyss reviewed on IndieReader


Lisa Krause is a trained sculptor and has been an Associate Artist with Black Cherry Puppet Theater since 2009. She has studied traditional marionette carving in the Czech Republic and recently just spent a month living and performing with the anarchist theater group, Bread and Puppet.  Krause facilitates puppetry workshops and has performed with Black Cherry at schools, recreation centers and community festivals across Maryland, Virginia and at the National Theater in Washington D.C.  She has also performed in the streets of Prague and the beautiful hillsides of Vermont.


There was a national tour in April 2013- May 2013 which included 15 bookings and appearances at Small Press and Alternative Comics Expo in Columbus, OH and Stumptown Comic Festival in Portland, OR.

Songs of the Abyss Tour Posters and Flyers! 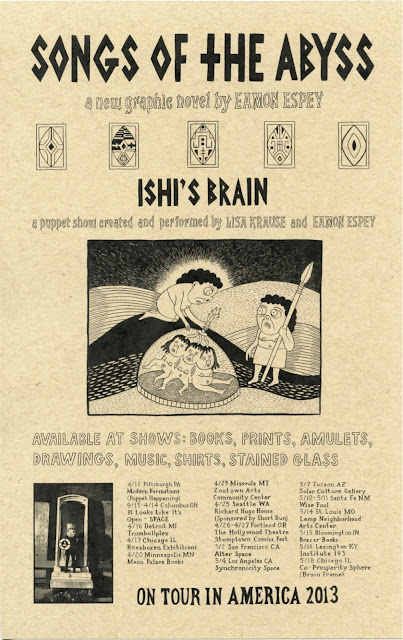 Posted by Lisa Krause at 6:12 PM No comments:

We arrived at the Hollywood Theater on Friday afternoon to unload our show for Saturday’s Gridlords 12 performance.  The Hollywood is an impressive old art-deco theater from the early 1900s. 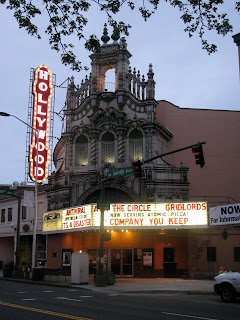 We got there a little early and saw the show listed on the marquee, as well as our photo on the upcoming events poster. 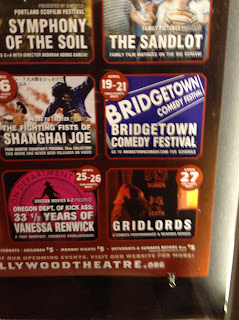 After meeting some of the theater’s staff, we were shown around.  The room where we would perform seats around 300 people, and has a stage and large screen for film/projection.  We were led through a dressing room area past the mirrors and makeup lights to the back stage area.  The room had ancient wooden floors and old cinema equipment with the large letters for the marquee stacked in neat piles on tables.  We picked a safe space to store all of our stuff and headed out to start unloading the car.

During that time, we met Sean Christiansen- the organizer of Gridlords, Emily Nielson who would co-M.C., and several of the other artists who would be performing with us.


Sean had been amazing the whole time preparing for the show.  He arranged for interviews and did amazing publicity for the show.  As more people arrived for tech meetings, we all got more excited.  Having an event at a venue this large was a first for both Gridlords and us- and it was looking to be a really great show.  I really admired Sean’s excitement and ability to organize such a huge ongoing event series for Portland’s comics community. 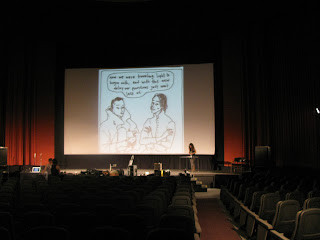 We unloaded into the theater and spread our things across the stage.  We began building our puppet stage so that we could spike the projection screen to make setting up for  Saturday’s show as easy as possible.  We were one of 4 acts performing, but the show also included projections and live music. Lots to stage manage!

We chose to go first because of our setup/breakdown time and stored our things before going to check in at Stumptown Comic Fest.  I grabbed the poor broken Ishi marionette and we headed over to Oregon Convention Center in our much lighter car.

After checking in, Eamon returned to the car with our badges- remarking about how huge the place is.  This was our first time on the west coast for a comic convention, and we were excited to be there in support of Eamon’s new book, our tour, and Secret Acres.  Next to fix the puppet.  We then headed to the hardware store near Scott Harrison’s house, where we would be staying for the weekend.  Scott Harrison is a renowned tattoo artist, painter, and raconteur.

I was excited to meet Scott, because Eamon has talked about him so highly over the years.  He had been an influential teacher for Eamon when he was in school, but their relationship flourished over the years as penpals.  Sharing work and ideas through writing, they’ve discussed everything from technique to personal politics to health issues and the joy and pain of following your artistic goals.  Scott swung open the door and gave Eamon shit immediately, in the manner of one of my favorite type of Chicago smartass friends.  He then got me to work immediately fixing my marionette in his impressive basement woodworking studio.  In a short while we headed out to get some drinks while the glue dried.

It was a nice evening meeting Scott and his wife Jennifer.  They were very warm and welcoming, and we were able to really relax with them.  During our stay we got to see some of Scott's most recent paintings, as well as some older work. 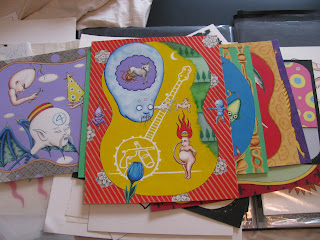 Saturday morning we left for the convention.  We’d heard that “Stumptown ain’t what it used to be” but we were still looking forward to the convention.  I always find the comic fests to be pretty fun, because there are always really excited people there and lots of interesting things that people make.  They can be exhausting, but its fun for me because I get to talk about the great work by all the artists Secret Acres publishes and explain the things I like about each of the books. I imagine its harder if you actually are one of those artists representing yourself.  Its also great to see old friends from across the country.

The fest had a really positive atmosphere. While there were a few weird costumes of mainstream superheroes or steampunks, they kinda kept us from getting bored because it was unusual to see people in costume at any comic show I’ve ever been to.  Plus they kept acting weird so it was pretty funny.

I had a lot of fun and Eamon sold many books and a ton of T-shirts.   We promoted the Gridlords show while talking to people about our wares and many people were excited about coming to the event.

The show that night was insane.  Nearly 200 people came to watch.  We went first.  By the time we’d gotten to Portland, we had performed the show 10 times and felt totally ready.  It was very exciting to do our show in such a professional venue.  It was also very meaningful because while many people there were friends others were also comic artists familiar with Eamon’s work that may not have known what to expect when hearing that he’d co-created a puppet show.

Before we started, I noticed Scott sitting front and center as well as a few other friends.
I was excited to perform with Chelsea Kamm, a friend from last year’s Bread and Puppet internship.  I had invited her to join the show, and couldn’t wait to see her shadow puppetry with Many Fur Puppet Troupe.

At the convention on Sunday, many people came to our table remarking about how much they loved our show.  It meant so much to me.  We have a lot of respect for the independent comics community in Portland- especially those closest to Dylan Williams.  I’m happy that they enjoyed our performance.

Here's what Scott Harrison had to say about our show on Instagram.

After the convention we headed to Eugene to stay with Chelsea.  We had a fun night talking with her, and said goodbye in the morning as she headed to teach her German students.

We went to breakfast at a hippie place in town. As we were paying for parking, a serious burnout was leaning over a newspaper box near the train station.  He was intently staring at his ticket.  Without looking up he said  “…Hey. hey dude.  …What does this mean: ‘RETAIN during trip’…does that mean they’re going to be watching me?”   Wow.  It was like he was hired to fulfill the stereotype of Eugene.

Everything in Eugene seemed to move at that pace, and as we drove we felt we were on a spiral of some sort, until we found the Jiffylube where we obtained the fastest most non-bullshit customer service of our lives.  The people that worked there were seriously running from car to car- shouting information and recording things as if it was an Emergency Room.  I couldn’t believe how they worked.  It was as if the entire life force of city’s population was demonstrated by the 5 people working there.

We headed out of town for a strange trip down the California coast, made stranger by a slowly developing head cold that Eamon first attributed to the strangeness of Eugene, and later Eureka.