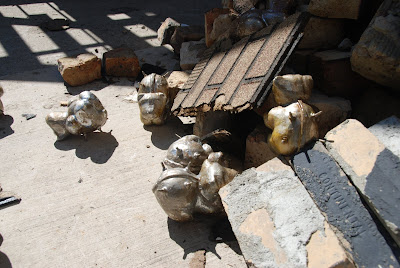 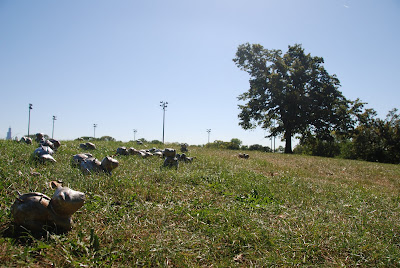 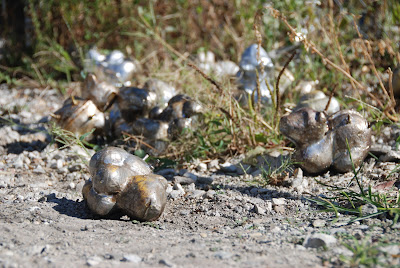 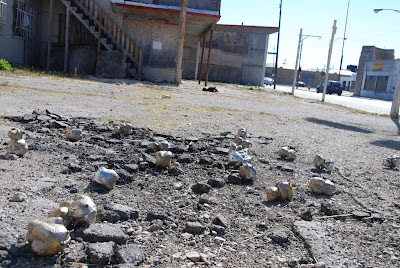 I incorporated my background in photography into this series, installing my small sculptures of Clusterbomb Bears in various locations in the city of Chicago and documenting the installations in the style of a photojournalist. The Clusterbomb Bears are cast plaster and found objects, faux finished using a process that takes on the same look of the casing of decomposing metal bombs found in bombsites. Using the same teddy bear symbol from my previous Watermine Bears, I am referencing a symbol of security and children that originated in the United States.

While we do not live amongst bombs, we must imagine what it would be like. Much of the population of the world is subjected to these situations, often at the hands of countries like ours. Clusterbombs are perhaps the most horrible of all weapons currently used in conflicts. Indiscriminate bombing in residential areas where civilians are maimed and killed by unexploded bombs waiting in the rubble. Children will find these bombs and think they are food or toys. The military will often argue that it is not cost effective to clean up after bombing campaigns. What I am hoping to achieve through this series is to enable civilians of our culture to imagine what it must be like to live amongst bombs. To help us understand what others are going through, and help pressure our military as well as the military of other countries - to stop using such weapons.

As a sculptor, I am influenced by international photojournalism, conversations, and news reports. I have a history of political activism and community organizing, and use this in my conceptual sculptures to address cultural problems and inspire thoughtful change in communities. During the course of this project, I spoke with people in the communities in which I installed my work as my project led to occasional random observers. The dialogues included discussions about military recruitment practices, bomb testing in Vieques, PR, and current military campaigns.
Posted by Lisa Krause at 7:35 PM