In the last few years I've been doing research on shrines and amulets. Then I use things I've found and collected in my own projects that are inspired by my research. Last year I made 30 each of three types of amulets to give everyone that met us in the desert last fall, and for some reason I didn't take any pictures of my process. I am making new ones now and documented them here. 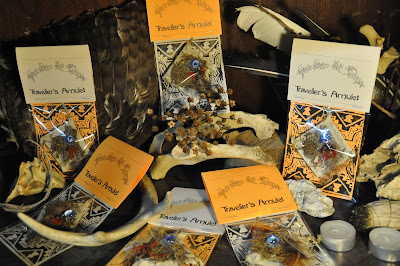 The symbolism in these amulets is sourced from practices in place for protection of travelers and people in transition throughout African, Asian, Eastern European, Mediterranean, Mexican, Middle Eastern, and Native American Cultures.

I combined those different symbols into my own super-amulet. 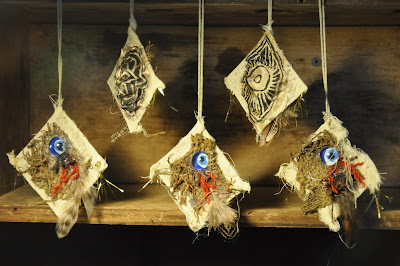 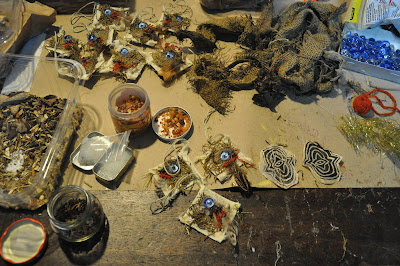 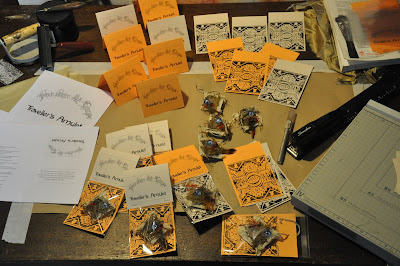 As part of the packaging, I include keys to the symbolism:
BLUE BEAD: sky/sea, turquoise, maintains harmony (Mediterranean/Middle Eastern)
EYE: one of the most powerful protectors against evil, blue eye stares back at the unseen evil eye meant to harm (Italy/Greece/Turkey/Uzbekistan)
TANGLES/LABYRINTH: confuse or catch evil spirits & dreams and they loose their way (N. American Indian/Finland)
TREES/TWIGS: regrowth (Europe/Middle East/ Asia)
TRIANGLES: amulets made for travelers are crudely stitched and protect from illness and the evil eye (Egypt)
FEATHERS: guide good dreams and ensnare bad. they move through the air and thus connect the human and spirit world. (N. American Indian)
RED: blood of life, most potent force against evil, confronts darkness with a blaze of sun and light (Eastern Europe/Russia)
RED THREAD: tied to anyone in a transitional phase of life (Greece/Bulgaria)
RESIN/CLOVES: strong smells repel evil spirits (almost everywhere)
*----------------------*
These type of Amulets were part of the art show C A R T in July 2011 at Current Gallery. The idea behind the show was to turn the gallery into some kind of art mini-mart.

Andrew Liang made a special display for them on the wall to the left of the register, next to Eamon Espey and Andrew's chalkboard mural. Monique Crabb took these two pictures of things I put in the show. 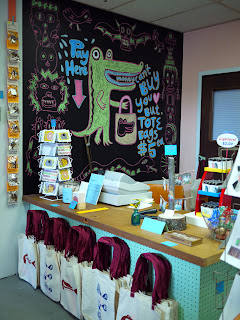 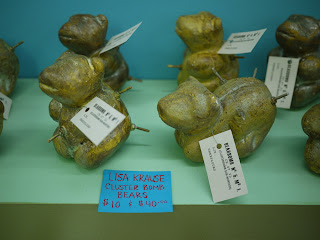