Bread and Puppet: : Part 2- Bread and Puppet's 4th of July Parades, our first weekly Friday night show "The Possibilitarians", and development and rehearsals for the weekly Sunday Circuses and Pageants 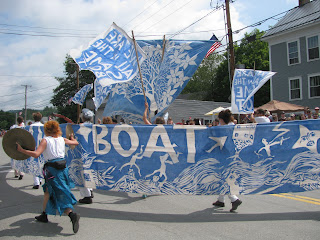 "We are all in the same Boat"  As soon as the internship began, we started learning the sequence for the parades Bread and Puppet had been booked to participate in for the 4th of July celebrations in 5 surrounding Vermont villages.  We revisited a parade that they had done in New York for May Day this past year.  It was a chapterized performance where the first part involved many people inside of a boat that was made of a long continuous printed fabric and several large flags that look like sails- each person holds up a section and dips while walking forward.  I was in the a drumline in the boat that alternated with the yodeling singers, giving them a break and keeping momentum for the length of the parade.  There were random interruptions by cymbalists that ran around the boat clashing- signaling rough seas and the sinking of the boat.  People would thrash the fabric back and forth and collapse to the ground- drowned, while the drums were beating wildly.  We would then resurrect with Genevieve Yeuillaz beginning the calling yodel from the front of the boat- echoing back and forth until the sails and boat rose and we began to march again. 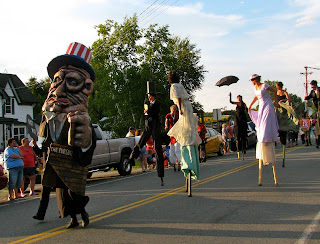 Each time we drowned, we would be heckled by longtime puppeteer Linda Elbow- dressed as a CEO, and Peter Schumann- dressed as Santa Claus who was walking with Uncle Fatso in his own ship: The Pursuit of Want.  Behind them were the 1% stilters and their brass band- dressed in fancy clothes and drinking cardboard martinis saying "they're all in the same boat".  Following them were skeleton with long arms wearing signs that said "Excellent Wind" representing the controversial wind farming- and the end were children dressed in blue waving flags that said "the Wave of the Future".   Reactions were varied from applause to crossed arms, support to confusion- but Peter said it was one of our most successful parade performances.  Each town had invited us and were happy we were there to add a spectacle to their annual parade celebration.

Video by my friend Myra, one of the printshop interns 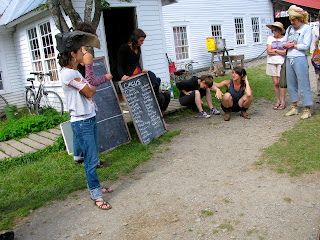 “Cultural preparation precedes revolution, not through organizing or arms training”  Every day through the week was spent in rehearsal of some kind.  Either we were practicing for the Friday show, the Sunday Pageant, or developing acts for the Sunday Circus.  The process of developing acts began with us listing ideas and inter-/national or local issues that we were passionate about.  It was facilitated by the staff puppeteers, and they would do a great job guiding projects and helping them be most successful.  We would go over the list in small parts deciding which acts we each would want to participate in.  Then we would break off to go to the shed where all of the masks, puppets, and props are stored.  There were things made over the course of the history of Bread and Puppet available for us to use in this space. 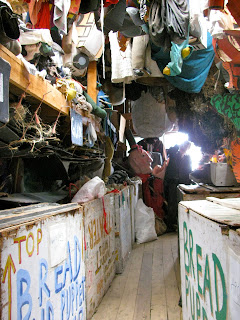 It is a really well organized and beautifully overwhelming place.  I enjoyed wandering the walkways exploring all the giant boxes and masks hanging overhead.  This process was pretty hard for me, because I'm not used to improvisational acting.  But it was always interesting to see what everyone was able to come up with in the 20 minutes or so that we had to put something together before showing it to the group.  Acts that weren't used in the Circus were available to be revisited on our own as Ding-Dongs- side shows that happen before the Circus starts, as a way to welcome the audience that trickles into the Circus Field.  Peter seemed to appreciate the new interpretations of characters created for acts and performances long ago.

"Remember the importance of joy and uplifting in activism" While some of our acts had serious tones, it was important to keep them fast and strange in order for them to be exciting to the audience.  So much can be conveyed in humor or absurdity, even when the theme is somewhat bleak.  After returning from the shed and practicing a bit in our small groups, would show our skits in the backyard between the garden and the house where the staff puppeteers live.   We would go through each act- with or without a response.  Then the acts would be further developed, combined, shortened, put on hold for the next week or axed all together. 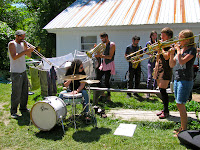 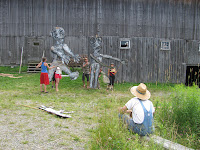 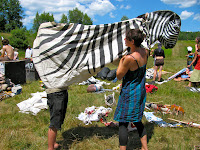 “We use all our performances as rehearsals.  We never ever finish them because the performance is a rehearsal. Its just a rehearsal with public, so the public becomes an actor...

After our shows on Friday night and the Circus and Pageant on Sunday- we had a day off on Monday.  Tuesday morning meeting was when we heard back from Peter about the performances and got an outline for the week ahead. It was then that we learned what would be changed in each of the shows or acts, and what would need to be developed in the week ahead.  Following that Tuesday morning was also our work day- where we did our main jobs on the farm.  I was in the Museum restocking the store, cleaning, and repairing displays; but after that we returned to work on our shows and acts.

“What is a Possibilitarian?  It is a utopianist, someone who believes in what is possible in this impossible world”

This years season of imperfect performances began on July 6th with our first show of The Possibilitarians in the Paper Mache Cathedral.  The Cathedral is a former barn that is now a dirt floor performance space covered in paper mache reliefs and paintings from floor to ceiling. It was a show we did the next 2 Fridays -until we first performed The Shatterer of Worlds on July 27th.  The Possibilitarians was inspired by the Diggers- an 17th Century squatters movement in England where people reclaimed common land and lived in peace without god or government.  The show began with a contestoria, which is a series of painted pictures on fabric banners attached to a pole so they can be  flipped as the song is sung.  We sang World Turned Upside Down that told the history of their uprising in order to set the tone for our show.

One of my favorite verses:

Once the gong rang and the audience was seated, I helped open the show by lowering the biggest marionette I've ever seen from the loft above so it could dive over the audience and begin a dance sequence with clouds.  It took 12 people working in tandem to operate the puppet smoothly, and my job was basically what my thumb does to control the marionettes that we use at Black Cherry Puppet Theater- I helped steady the head and make her movements more dramatic.

In this video by Matt Palo taken on July 20th- our last performance of this particular show, You can see the descent of the Blue Sky Goddess that began The Possibilitarians.  I'm up in the balcony to the right.  In the second act, you can also see me playing the chimes- which were basically 6" washers, rusty circular saw blades, and iron scrap chunks of metal tied to the 2x4s that framed the walls and hit with smaller metal rods as strikers- for the Animal Dance in Paradise.

The Earth Momma was delivered during the Blue Momma's first appearance.  Following the cloud dance, puppeteers manipulated separate pieces of her form.  The Earth Momma was confused- pieces were at war with one another- it kept forming different sculptural shapes until finally becoming a reclining woman and gave birth to a small, naked, and scared looking man.

I'm not sure if that spelling of proletariat was intentional, but it seemed that way.  In this act- these 2D cardboard people came out garbling and hooting in a wild mess- dancing forward to see the man born from the Earth Momma.  Various representatives came forth from the crowd preaching about agrarian theology, injustices committed against the earth, and respect for all kind.  The other characters echoed back what each representative said in a silly chatter and danced from side to side.

Following this act was the University of Hands and Feet, where we learned basic skills such as caring for one another, the benefits of digging in the dirt, and raising hands against the existing order of life.  We learned to walk carrying our body and soul, and to kick the ass of government.

Then everyone moved to put on jackets and ties, grabbed weapons that had been lain around the stage and raised them in unison for next act: The Epic Battle of Good and Evil.  The battle was entirely in slow motion and we silently killed each other off until we were all dead on the ground, and operatic singers advanced through the bodies- joining us on the dirt floor.  Peter gave his Fiddle Sermon of the folly of our times, calling us to rise up to the potential of a new understanding.  We finished with several verses of The Diggers Song.


* * * * *
All quotes are by Peter Schumann from my notes, unless otherwise cited.


Coming Soon: Part 3- The Everything and Everywhere Dance Circus, The Pageant of The Possibilitarians, the second weekly Friday night show "The Shatterer of Worlds" and saying goodbye to your mother ...among other people.