I spent just over a month this summer as an apprentice with Bread and Puppet in Glover, Vermont.

This is something that I’ve wanted to do for about 10 years, since when I was more of an activist doing Food Not Bombs and working at New World Resource Center in Chicago.  But it was something out of reach in my former life.  While it is easier now, coming up with the money to drop out of my life for a month was hard to do.  But now after the experience- I can't imagine not having done it.  I am thankful now that I can go because of my current lifestyle, flexible occupations, and Eamon. 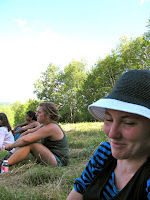 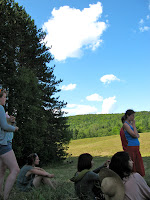 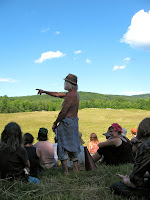 Before leaving, I knew that going to Bread and Puppet is a chance to live collectively among activists and artists while collaborating on political puppetry and I was curious about the way that something like this can actually happen.
I was looking forward to having the opportunity to work under Peter Schumann-  to understand just what kind of person could travel the world with urgent, politically relevant, beautiful and often terrifying puppet shows completely made out of trash for 50 years.  I have come to realize that he is not slowing down.  He is becoming more urgent with his years. 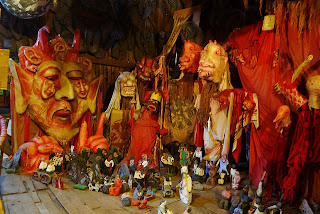 “Art making against the existing order of life”

Bread and Puppet began as community theater, tackling the neighborhood issues inherent to a city such as New York, but it quickly grew.  The idea was to make political theater in the streets of New York in the 60s as a reaction to Vietnam.  To interrupt the faceless masses of people trying to hold on to conservative ideas during a time of world-wide insanity. Only a few people who had some of the facts  were freaking out in their minds. What can be done?  Tell their stories.  Perhaps the urgency was due to the lack of information available at that time, before computers gave us more than we can understand.
“For us there was a need to create something better than stupid leaflets and intellectualizing- its boring."  Peter said,  "It’s the color and speed that gets to people.” 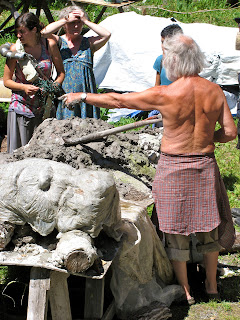 Peter Schumann began as a sculptor.  He uses scrap materials and works with the clay dug from the farm in all of it's awful naturalness. He moves quickly from project to project.  Sculpting, painting, carving... we come to finish it with paper-mache over the clay, rigging the puppets, or printing his woodcuts.  I had a very liberating feeling there watching him work.  Seeing him work quickly with whatever is available was one of many realizations that helped me reflect on my own values.  Its funny how a 70+ year old man can be more of a punk anarchist than I ever was.  He works hard with whatever is available- using cardboard collected from local businesses, mixing glue from cornstarch-based packing peanuts, and painting with leftover house paint- everything is recycled.  The aesthetic is raw, quick, unapologetic, and intense.  If you need it, you make it.  Like when I needed a strap to carry my drum- in 2 min. I was quickly shown how to make one from a flat bike inner tube, trash foam, and duct tape. 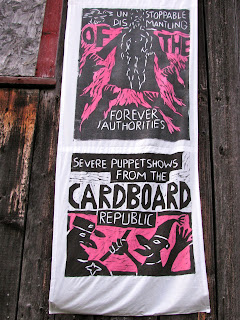 “The world is a giant terrible place.  We must create chaos to live in this terrible mess”

Peter's aesthetic style of woodcut is as much part of Bread and Puppet as the puppets are.  Jagged words chalked out and cut into scrap masonite and printed on old bed sheets with watered down house paint. Swirling archetypes, iconography and words in a form of english intended for a more urgent impending time.
During our visit, Peter and Elka gave us a tour of the print shop.  Peter told us about how in New York he would use the masonite that was ripped out of the tenement houses that were constantly being gutted- or from the backs of furniture thrown in the alleys.  He makes the woodcuts in the quiet winter months and while it used to be his wife Elka that decided the color and printing, Lila prints them now- working with Elka on those decisions.  The fabric prints are often sewn into things used in our parades and performances as well as stocking the museum store with posters, banners, patches, flags, etc. 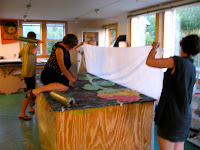 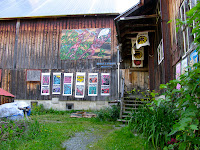 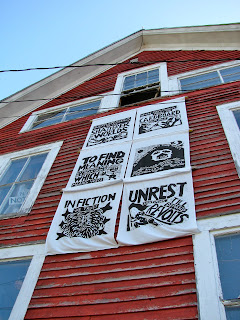 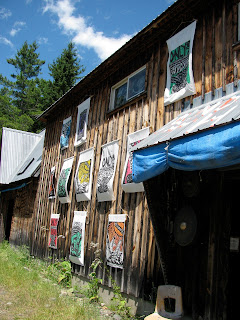 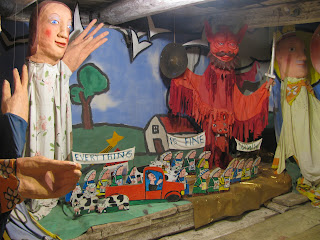 The Bread and Puppet Museum is in what used to be a dairy barn from the 1800s.  It's a massive building that houses work from across the 50 years of the theater's existence.  In addition to puppets of all sizes there are dioramas, reliefs, small paintings on cardboard, flat wooden figures and giant paper mache globes.  Each stall and bay has scenes of shows with puppets of various sizes in themes such as Anti-Vietnam War, the assassinations of Oscar Romero and Chico Mendes, My Lai Massacre, Cambodian genocide, Environmental themes, angelic figures, Uncle Fatsos- the grotesque counterpart of Uncle Sam, Persephone, St. Francis, Medieval and Pagan figures, giant red demons representing the threat of nuclear war, and the garbage men and washer women who fix everything. 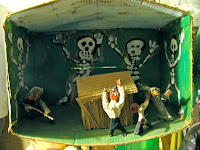 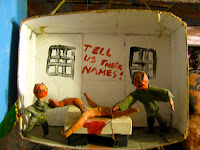 During my internship, I had the good fortune of getting my first choice of jobs- working in the Museum.  I really enjoyed the opportunity to spend time with work that has spanned the entire history of Bread and Puppet.  I enjoyed the intimate experience with all of the work while cleaning the exhibits and even got to repair some of Peter's work that had proven its impermanence a little too soon.  After our Friday night shows, I was often staff in the museum store and got to anonymously overhear audience members reaction to the shows, learned how far they travelled to come, and also helped to educate the public on some of the exhibits.  My favorite part of the job was getting to know and working directly with Elka Schumann. 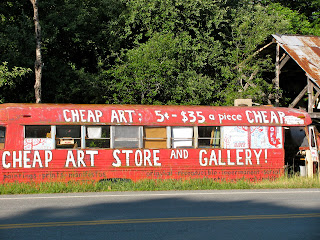 "PEOPLE have been THINKING too long that ART is a PRIVILEGE of the MUSEUMS & the RICH.  ART IS NOT BUSINESS!  It does not belong to banks & fancy investors.  ART IS FOOD.  You cant EAT it BUT it FEEDS you.  ART has to be CHEAP & available to EVERYBODY"  Across the street from the museum lies the Cheap Art Bus.  It serves as a place for puppeteers and interns to make a little money selling things they make- from small art to prints, patches and stickers.  I found a little time a few weeks in to the summer where I drew and painted warriors on cardboard and sewed a frame of sticks around them.  It felt good to have a quiet activity in my free time and sell all the stuff I made. "I am an anarchist.  Bread and Puppet is over-organized anarchy."

Every morning began with a meeting at 9am during which Peter would lay out the plan for the day ...which would then be amended at the 2pm afternoon meeting.  He would often give quick plans for rehearsals, or the development of shows and other projects on the agenda- and then he'd be off to finish baking bread, paint a contestoria, sculpt or paint new puppets.  It was then turned over to those just under Peter that would decide how exactly things would get done- these were the puppeteers who have been working with Bread and Puppet for many years.  Most days there were 40-60 of us- we'd pick our jobs to be handled in smaller groups and reconvene after siesta.  At the end of each morning meeting, we sang Shape Note songs.  This was something very difficult for me because I don't just sing all the time, and I had an involuntary repulsion to many of the songs because of their Christian themes.  Later though I realized the epic intensity of reviving songs written ages ago out of awe and reverence for nature.  Maybe it was a survival tactic, but I began to realize how many of the most apocalyptic songs would be great metal covers. It was felt great to start the day yelling with a huge group of friends.

This was one of my favorites: 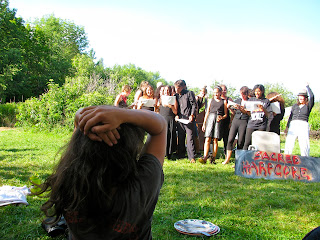 Word quickly got around among my new friends that I loved the idea of a shape-note metal band, and so by late in the month something epic happened.  Eamon came up to visit with Matthew Thurber and Rebecca Bird- and they bore witness to one of the most amazing things that has ever happened for my birthday: Sacred Harpcore.  A huge group of some of my favorite people made my idea happen!  It was amazing to see a them get all dressed up, sharpie tattooed, and growl the lyrics to these songs.  I was really shocked and before it was over they grabbed me, a pit broke out, and they crowd-surfed me!  Hilarious!

Our days often included night activities where we learned more about the history of Bread and Puppet through a panel discussion of long time company members taking place at Emergent Mosaic, an exhibit of photography by Mark Dannenhauer.  There were also opportunities to go to political actions and protests surrounding the Vermont Tarsands project and installation of the controversial wind turbines.  We saw many shows from visiting performers and puppeteers- including Less Miserable- a 100 person huge touring show adaptation of Les Miserables, directed by Baltimore-based Donna Sellinger of Missoula Oblongata.  There also were shows by current puppeteers doing Bertold Brecht's St. Joan of the Stockyards, a performance of Do Right Bellyfire, Do Right Monkey Brain at Plank House Farm where Bread and Puppet's Rose Friedman and Justin Lander live, and Y No Había Luz from Puerto Rico, among others.

* * * * *
All quotes are by Peter Schumann from my notes, unless otherwise cited.

Next: Part 2- Bread and Puppet style 4th of July Parades, our first weekly Friday night show "The Possibilitarians", and development and rehearsals for the weekly Sunday Circuses and Pageants.

Later: Part 3- The Everything and Everywhere Dance Circus, The Pageant of The Possibilitarians, the second weekly Friday night show "The Shatterer of Worlds" and saying goodbye to your mother ...among other people.

Disclaimer:  This is my second draft of writing this entry.  I already wrote the entire thing and had it pretty ready to publish but then accidentally deleted it.  Aaahrgh!  I hope I can recreate the mood accurately now that I've been back a few weeks.  Also, I'm using some other people's photos and giving credit- so If you see something you took not cited-Please let me know. Thanks!
Posted by Lisa Krause at 6:43 AM