Pittsburgh and Ohio: SONGS OF THE ABYSS Tour 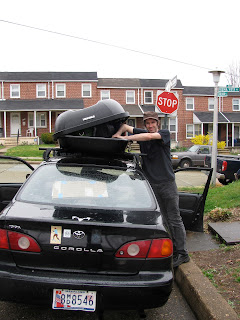 First days of tour going great!  We're learning how to pack the car- and its amazing that we can get the whole show in there. This is the cargo carrier and roof rack we bought with the funds from Indiegogo. So thanks everybody!
It was raining the morning we left, but we had packed the night before- putting our cardboard show in contractor bags. 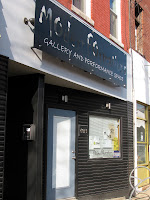 
I really like Tom's puppets, and their adaptation of Aristophanes' Peace was really funny.  I invited them to Baltimore to perform in the future.  Our show was in the Pittsburgh City Paper, and attracted a large audience of people from the puppet community- and many bought both Wormdye and Songs Of The Abyss after the show.  Several puppeteers were in the audience and were interested in coming to Baltimore to see Black Cherry Puppet Theater.  That night we stayed with Mike and Jessica at their house- and met 19 year old Baby Kitty, the first cat I've met who is on Dialysis for kidney problems.  She was very sweet, and made us miss Rufus.


A short drive the next morning to Columbus, where we had a chance to stop along the way for some T'ai Chi at a rest stop. It was nice to take some of the edge off from driving, and we thought our teacher Kariem would be happy to know we're trying to keep up the practice.  We arrived at Small Press and Alternative Comics Expo (SPACE), where Eamon was sharing a table with friends J.T.  Dockery and Mark Rudolph.  I took a nap in the hotel lobby for a hot minute, and then got teased by J.T. and Mark for already being beat at the front end of tour!  The festival was pretty well attended and we had a chance to catch up with Jeremy Baum, Sean Ford, Matt Kish, John Porcellino, Gabby Schulz and Tom Spurgeon.

Our performance that night was at Kafe Kerouac, a bookstore/coffeehouse near Caitlin McGurk's house.  We performed with The Smacks! (J.T. Dockery and Brian Manley), Leela Corman and Maddie Fix.  It was a really well attended after party- full of people from the festival and some people from off the street.  It was fun to perform with Comic Artists who are also musicians.  The other acts used projections of their comic art behind their performances.  I was excited to finally see The Smacks! play- they're pretty legendary and brought some danger with their hit song "Sex Apple."  I'm excited to perform with them again in their hometown of Lexington, Kentucky on our way back east next month.  I'm sure the crowd will be a blast!

Monday will be my workshops teaching Shadow Puppet basics and a non-screen printing method for making Art Patches to sew on your clothes.  I'm looking forward to meeting the teenagers at the Wexner Center's theater program and Ohio Shorts Film Festival.


Tuesday is Detroit!  Wednesday is Chicago!


I also just saw this interview of Eamon Espey by Daria Tessler for Gridlords in Portland!  We'll be there toward the end of the month for Stumptown!